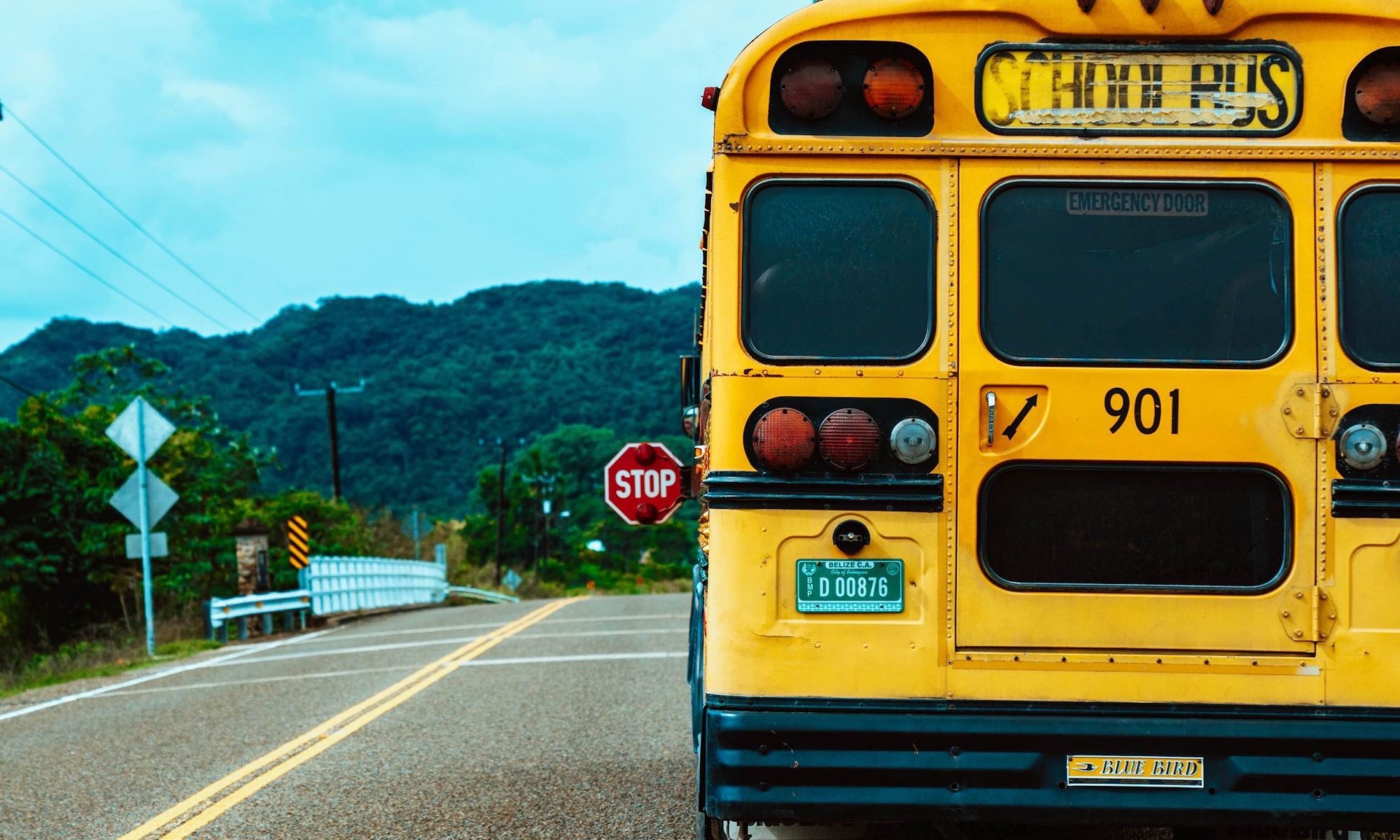 When I was a toddler and my older brother Matt was in first grade, he rode the school bus each morning to school. One particularly memorable spring morning, the bus full of children arrived at its usual stop while my mom was still urging my brother to put down Batman and hurry to the bus stop. By the time my brother reached the bus, its doors had just closed, and the other neighborhood children were already finding their seats. I’m still not sure if the bus driver did not see my brother or just wanted to teach him a lesson about timeliness, but he drove away toward the next stop while my brother was still trying unsuccessfully to pry open the doors. My mom, watching this all unfold from our front door, saw my brother’s superhero self-assurance take over, as he decided he could catch the moving bus – whose wheels were taller than he was.

My father heard the commotion from my mom and came out of his bedroom just in time to see Matt running down the middle of the street dangerously close to oncoming traffic and a moving school bus. This would be a dilemma for any loving father. But unfortunately for everyone involved, the problem was compounded because my dad was in the middle of getting dressed.

In the following split second, my dad made a decision that would become folklore in our small hometown. Without hesitation or trousers, he darted out the front door running after my brother. By the time my dad caught up with Matt, the neighbors had come out of their homes, alerted to the unfolding drama by my mom’s horrified screams and a nearly-naked grown man running down the street. Fortunately, before my brother caught up with the school bus, my dad scooped my brother into his arms and carried him safely home. The neighbors were speechless as they watched my dad, far more concerned about his son than he was about the public appearance of his underwear.

Prior to this episode, my father had said things to my brother, older sister, and me like, ‘I would do anything to protect you all.’ We heard him say this, but we had not seen the lengths to which he was actually willing to go for us. After the episode of his running down the street in his underwear, we understood our father was willing to sacrifice his own good (and pride) if it meant protecting us. That spring morning’s activities were a clear demonstration of this aspect of his character. He loved us and was willing to fiercely protect us, even at his own expense. Along with his underwear, we all saw my dad’s character on display in dramatic fashion.

For centuries, God had been revealing aspects of his character to his people that they had not yet fully seen demonstrated. But it was at the cross that God’s character was seen dramatically and clearly. All creation could see God’s holiness, righteousness and justice, as well as his grace and love displayed in powerful clarity at the cross of Christ Jesus. Today, we will look more closely at how the cross of Christ displayed the holiness of God. In the following few weeks we will consider how Jesus’ death displayed other aspects of God’s character.

The holiness of God is perhaps his most defining characteristic, and while God ensured his people knew of his holiness in the Old Testament (Exod. 3:1-4, 17; Exod. 19:16-24; 2 Sam. 6:1-11), the cross provides a significantly clearer picture of it. God’s holiness encompasses his moral purity, although there is a second use of the word in Scripture we must keep in mind. Scripture’s use of the word holiness usually refers to being separate or intentionally set apart for God’s use. God met Moses in a burning bush and even the ground around the bush was set apart as holy. Aaron was ‘set apart’ as the first high priest to make offerings to God and pronounce blessings from God (1 Chron. 23:13). His lineage became the priestly line, separate from the rest of the tribes of Israel to keep the holy worship of God according to God’s command. The center of the tabernacle was set apart as the Most Holy Place (Lev. 16) because that is where God’s presence dwelled. No one could walk into that room nonchalantly and live.

Unholy people cannot be in fellowship with a holy God. They have not been set apart for God’s use, and they have no right to his morally pure presence. Our sin keeps us separated. The cross then is the only answer to the question of how a holy God can be reconciled to an unholy people. Through a perfectly holy mediator our sin can be paid for and we can be declared righteous. We can be set apart to be in the presence of God.

The only acceptable form of payment for treason against a holy God is a perfectly holy substitute for us. Our guilt is punished in Jesus, and he transfers to us his righteousness so that we can be made right with a holy God. Through this exchange of our sin for God’s righteousness, God upholds his holy character by punishing sin and declaring his people holy in Christ. This does not compromise God’s own holiness and righteousness. Instead, he removes our dirty sandals and gives us new metaphorical shoes so we can stand on his holy ground.

This great exchange – our sin for his righteousness – is what Paul boasts about to the Corinthians when he writes, ‘For our sake he made him to be sin who knew no sin, so that in him we might become the righteousness of God’ (2 Cor. 5:21). If you are in Christ, his righteousness now belongs to you. In theological terms, it has been imputed to you. This exchange rate is unbeatable. We trade in our sin and – in return – we get the perfect righteousness of the Lord Jesus. Cloaked in the righteousness of Christ, we are able to freely enter the most holy place. At the death of Jesus, the curtain in the temple separating the outer court from the Most Holy Place was torn in two from top to bottom, signifying that sin would no longer separate God’s people from Him. Those who enter through Christ enter into the very presence of God (Matt. 27:51, Mark 15:38, Luke 23:45). Our perfect high priest has already made eternal atonement for us, and our sin no longer prevents us from approaching the holy God.

The Riches Found at the Cross

How foolish of us to brush past an enormous truth like this without meditating on the richness of it. At the cross, your biggest problem has been solved, and you contributed nothing to its solution. Your greatest boast has been accomplished, and your contribution? Absolutely zilch. In God’s vast wisdom, he simultaneously revealed his holy character and accomplished salvation for his people. I can think of other routes that God could have taken to clearly reveal his holiness, but they all end in eternal punishment of man. Only through the cross of Christ was God able to fully reveal himself as holy and altogether separate from sin, and yet also accomplish salvation for his people. Oh the depths of the riches and wisdom and knowledge of God! (Romans 11:33)

Subscribe to this blog to receive Jenny Manley‘s next two articles on God’s display of his character at the cross. These articles are excerpts from Jenny’s new book, The Good Portion: Christ.